“John and I would just like to thank everyone for coming to our wedding and making it the day that it was. We could not have asked for a better time or a better group of people to celebrate with. Thank you so much and we hope you had fun!”
Kaitlin

Tell us about the dress and accessories?

“ I went into Andrea’s Bridal in Portland looking for a very simple dress. I had watched Say Yes to the Dress and picked out a bunch of dresses online that were very simple and elegant. When I got to Andrea’s with my sister, Kim (my maid of honor), and my mother that all changed. Every dress I pulled was the complete opposite of simple. I ended up with a strapless gown that sparkled and had intricate beading and a full flowing skirt. It was the third dress I tried on and I knew immediately that was my dress. I ordered my shoes from Andrea’s as well and had them dyed the color of the bridesmaid dresses. They were my something blue! –– Kaitlin”

“
I ordered my shoes from (Andrea’s Bridal) and had them dyed the color of the bridesmaid dresses. They were my something blue! ”

“
I went to Fabu in downtown Portland to get my hair and makeup done. They did an amazing job! I had looked up a bunch of pictures of hair on Pinterest and came in saying I’d like something like these and they did an amazing job making that a reality. For makeup, I wanted everyone to look really natural since it was a pretty early ceremony and pictures were being done in the daylight. Everyone looked fantastic! Kaitlin”

“ Our florist was Shelley Stevens of Bloomers Events and she did an amazing job. I loved all of the flowers that were there, especially my bouquet. Kaitlin”

“
My parents were amazing through this entire process. My mom claims that all this last year – no matter what we would be talking about – I could always bring the conversation back to the wedding somehow so thank you for dealing with that. My dad walked me down the aisle and during rehearsal told everyone that if he cried at the wedding they would be tears of joy that he finally got rid of me. Love you too dad. Kaitlin”

Who was your Maid of Honor?

“
Kim was my maid of honor. She’s my big sister and I couldn’t imagine getting married without her. She lives in Texas so she missed out on a lot of the whirlwind romance but it meant so much to me to have her here for the wedding standing up there next to me. Kaitlin”

Tell us about the bridesmaids

“
Renee has been there since the very beginning of mine and John’s relationship and I’ve known her since middle school. She’s been so supportive and amazing through all of this. I’ve known Nicole since middle school and we were college roommates our freshman year. She was definitely my most organized bridesmaid throwing the bridal shower and the bachelorette party. She was incredible. Erin is the newest of my friends, I met her in college. She’s engaged right now so she would get phone calls asking what I’m supposed to do about certain things, she had no idea either. I’ve known Melissa since I was pretty much born. Our dad’s actually went to high school together and so did we. She’s my longest friend! Kaitlin”

“
I was so happy when John chose Andy to be his best man, no offense groomsmen. Andy is John’s brother-in-law and has known him since he was a toddler. It was really special to have someone who has seen John grow up and who has been married for so long himself stand up there with John and support him. Kaitlin”

“
John chose his 4 closest friends to be his groomsmen. Gordon has been his best friend forever, Bobby was his roommate at USM, and he’s been friends with Feeney and James since high school. Kaitlin ”

“
John and I wanted to get our formals done before the ceremony so we didn’t miss any of our reception. Lucia suggested we do a first-glance and I’m so happy that we did. We got most of the pictures done beforehand and got to cocktail hour right on time. Kaitlin ” 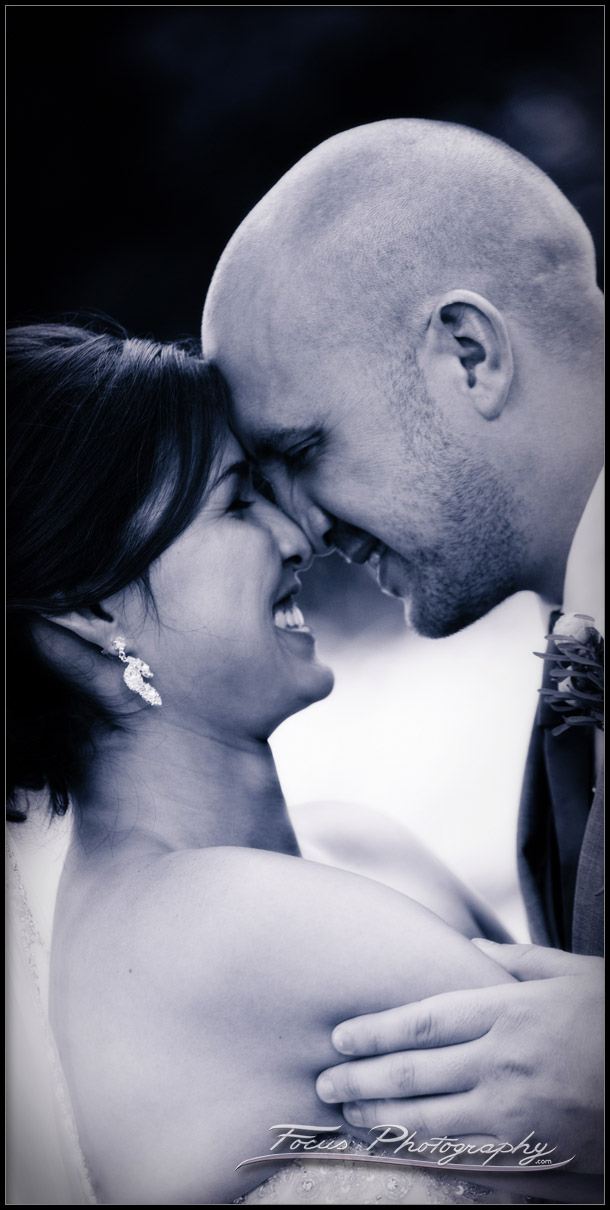 “
Focus Photography was amazing at our wedding! We knew after our first meeting that these were the people for us. John loved joking around with Will and Lucia kept everyone in check. All of our personalities just clicked. John and I like to joke around and be funny and spontaneous and that fit Will perfectly. None of us would have gotten anything accomplished though if it wasn’t for Lucia. Everyone told us how amazing it was to have you guys there as our photographers and how excited they are to see the photos! Kaitlin ”

“
We’ve been together a little over a year and you can definitely categorize us as a whirlwind romance. I took a job waitressing at a local restaurant/bar in between finishing college and walking in graduation and John was my boss. He says it was love at first sight and I think I had a good case to file a sexual harassment lawsuit 🙂 A few weeks after we started dating, we made a bet about whether a different bar was open on Mondays and I won (naturally) and my prize was he took me on an 8 day Caribbean cruise. A month later we were engaged! Kaitlin”

“
We got the limos pretty early (Atlantic Limo) to get hair and makeup done so I drove around picking up all my bridesmaids and on the way into getting dolled up we stopped at Mr. Bagel for breakfast. This wouldn’t be a big deal except I was wearing nothing but a robe that said bride on the back. It was quite the sight.”

“
We caused another stir at Siano’s across from the church when we showed up after pictures were done but before the ceremony. Everyone was in their wedding attire, including me, and we got wine and pizza. People were taking pictures of us! Kaitlin ”

“
We got married at Deering Central Community Church. The church is right up the street from my parents house. I chose it because of how beautifully simple it was. Kaitlin”

“
John’s dad Mark performed the ceremony. I couldn’t imagine having anyone else marry us and neither could John. There was that personal touch he brought to it. Kaitlin ”

“
Focus Photography was amazing at our wedding! …Everyone told us how amazing it was to have you guys there as our photographers and how excited they are to see the photos! Kaitlin ” 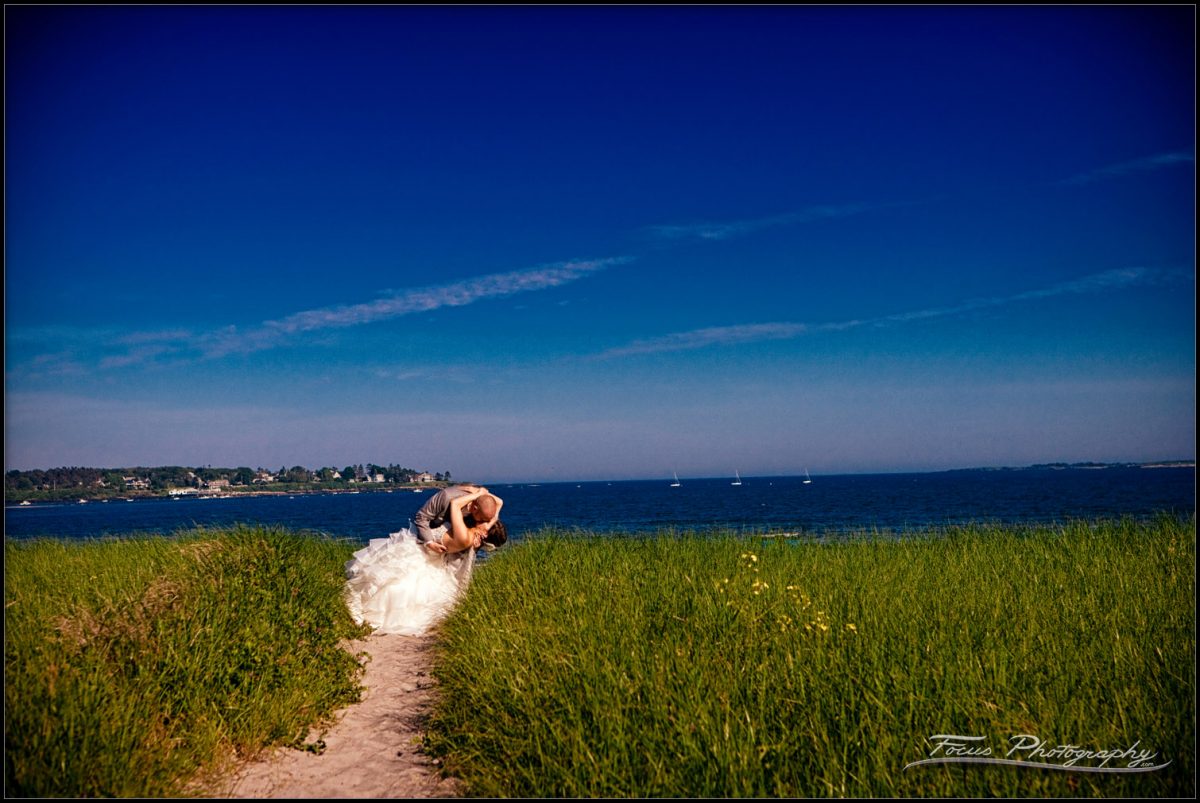 “
Our reception was at The Landing at Pine Point. Originally, we were supposed to have our reception at Ocean Gateway in downtown Portland until we found out that they were having a concert right outside in the parking lot on the same night. We had 9 days to find a new reception location and I can’t tell you how happy I am about that concert. I can’t even imagine having our reception anywhere other than The Landing. It was incredible! The location is beautiful and the way that it was decorated was breath taking. You’d never know the reception wasn’t supposed to be there. Kaitlin”

Did you have a wedding Coordinator?

“
We worked with Kathleen of Black Tie Catering. I’ve told everyone that we wouldn’t have had a wedding if it wasn’t for her. She was outstanding! I’d think of things late at night and email her and the next morning I’d have an email telling me she could make it happen. The whole wedding was breathtaking and its as all because of her. I cannot thank her enough for making my wedding day so special and memorable. Kaitlin ”

“
My first dance with John was interesting. We spent most of it talking back and forth. He really wanted to dip and spin me and I was convinced he was going to drop me. Eventually, I let him and he didn’t drop me. Kaitlin ”

“
We had four different toasts. Kim’s toast was funny and sweet. She captured us perfectly and talked about how John is the only level headed one in our family now. Andy’s toast was about watching John grow up and become the man he is today. It was great having someone speak who has seen John through the many stages of his life. My dad gave a toast that was funny and welcoming John into our family. Then there was a surprise toast. My cousin Matt couldn’t make it to the wedding. I’ve grown up with Matt and I’ve always considered him to be more like a brother than a cousin. He surprised me by sending a speech that was played over the sound system. It was really sweet and funny telling John what he needs to do to be a true Williams. Kaitlin ” 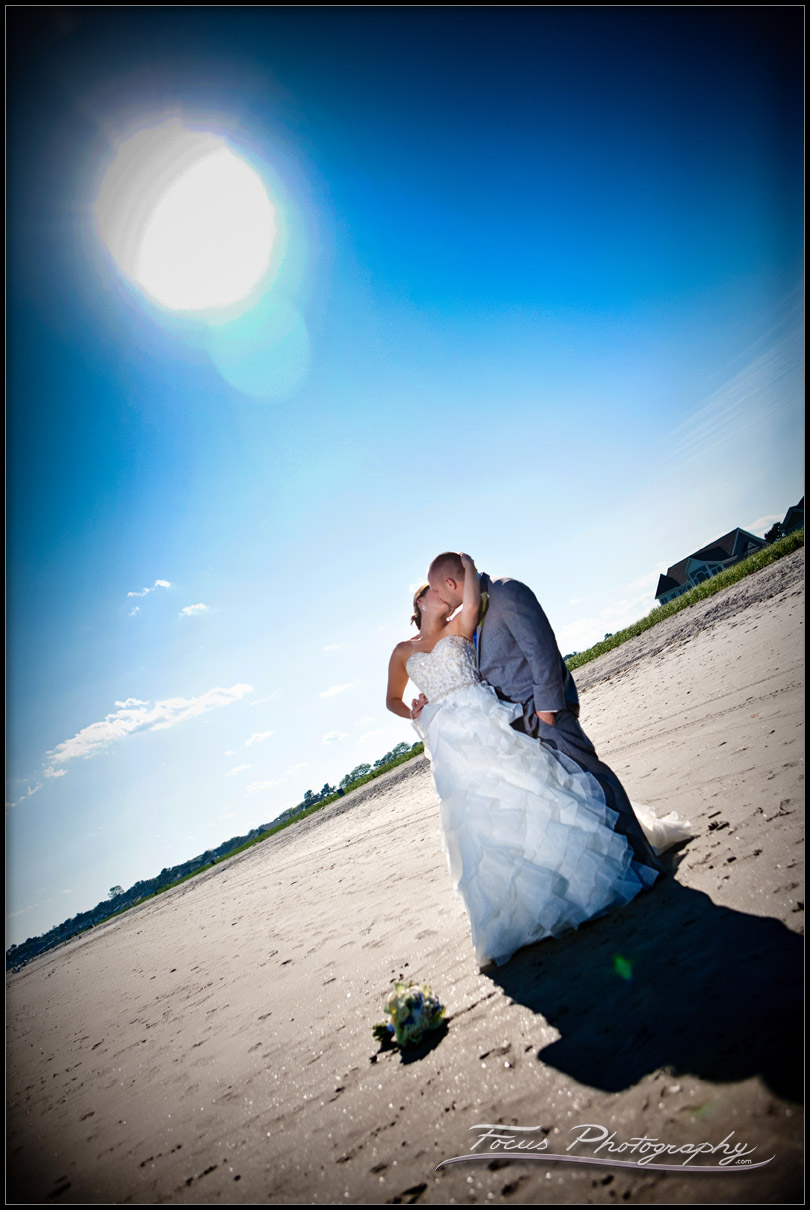 p style=”text-align: left;”> Thanks for looking – Will